You are here: Home / What’s on / Past exhibitions / Edgar Evans – 90 Degrees South / The sea was in his blood 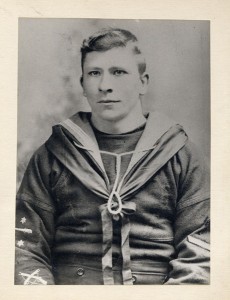 Edgar ran away to join the Royal Navy.

He was well-built, weighing over 180 lbs and became a physical training instructor at HMS Excellent, WhaleIsland, Portsmouth and later a naval gunnery instructor.

It was at this time (1897) that he first met Captain Robert Falcon Scott, while serving on the HMS ‘Majestic’, a Royal Navy warship.

He joined Scott’s first expedition to the Antarctica in 1901, aboard the ship the ‘Discovery’.