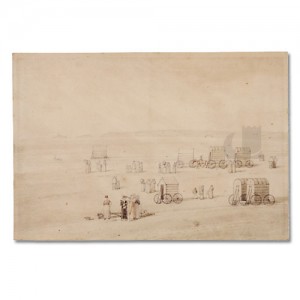 This watercolour by Thomas Baxter depicts a busy time on Swansea Sands, near the Bathing House which occupied a site looking on to the beach from the burrows, a site now occupied by the West end of County Hall.

Purchased by the Corporation in 1789, the Bathing House aimed to cater to the well-to-do visitors who discovered in Swansea a favourable alternative to Brighton or Weymouth.

Their facilities ranged from hotel, restaurant and dance-hall to a base for the bathing-machines seen here, as well as providing baths and dressing rooms.  In the background can be seen the Mumbles Head and the sweeping coastline of Swansea Bay.

The foreground is dotted with groups of fashionably-dressed ladies, some with children. Standing to the left of and a little apart from the foremost group is the bathing-woman or ‘dipper’ who served as “…marine emerser to the fair maids of the Swansea flood “.  (Andrew Cherry, theatre manager –The Cambrian 5th September,1807)

The bathing-machines (wooden huts on wheels) were drawn into the shallows from where the bather, via a short ladder, could gain access to the ‘therapeutic’ waters in complete privacy.