You are here: Home / What’s on / Past exhibitions / Copperopolis / Swansea Ships and Copper

In the 1860’s, Swansea was a very different from the present day city.

The docks were filled with pleasure boats, and bristled with ocean- going merchant ships, Swansea was the most powerful seaport in the world. 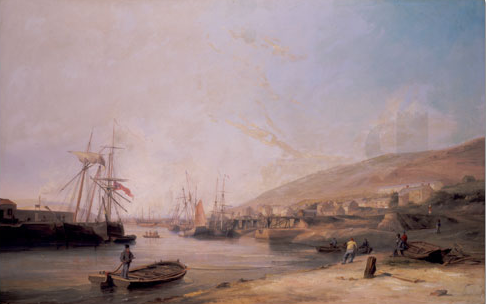 From these docks, vessels sailed all over the world, carrying many different cargoes. But one cargo above all others represented the enormous prosperity Swansea enjoyed during the boom years of the nineteenth century and this was copper ore.

Many of the rich industrialists of the time found Swansea an ideal site for their copper works, because of the large reserves of high grade coal close to the navigable River Tawe. Three to four tons of coal was needed to smelt one ton of copper ore, so it made economic sense to bring the ore to the coal.

Originally, the ore came from Cornwall and other parts of Britain, but when these mines were worked out Swansea ships sailed to Spain, then Cuba and finally to the Pacific coast of South America. The usual cargo on the outward voyage from Swansea was coal.

It was an arduous journey, through the Bay of Biscay to Tropical waters, across the Equator and on down to the bitter cold and storms of the South Atlantic, around the notorious Cape Horn; and back up into warmer seas before reaching the Chilean ports.

Copperopolis: The Hidden Hero of Trafalgar