You are here: Home / Our collection / Finds from Swansea and Neath / The Gnoll Stone 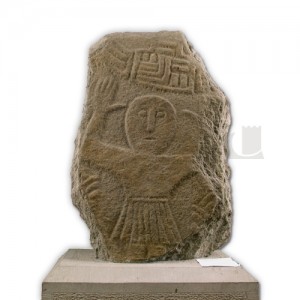 (Cefn Hirfynydd) is part of a Celtic wheel cross.

The figure is a Celtic priest with his hands raised in prayer, he wears a short pleated kilt.

This cross was carved during the eleventh century. It represents a Christian tradition brought to Wales by monks from Ireland. Human figures carved on Celtic crosses are very unusual in Britain.

We do not know where the cross originally stood, it was found on a mountain near Banwen, north of Neath, where it may have been used as a boundary marker.

During the eighteenth century, Sir Humphrey Mackworth, a local industrialist moved the stone to his home, The Gnoll in Neath, where it was included in the grotto which he built in his garden.