You are here: Home / Our collection / Finds from Swansea and Neath / Tailwaggers Club Tag 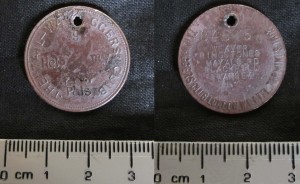 Established in 1928, the Tailwaggers club provided funds for the Royal Veterinary College to support their work. Two years later popularity of the charity allowed the club to offer financial support to the newly-formed Guide Dogs for the Blind. At it’s height in the 1930s there were almost 1 million dogs as part of the club, including those of celebrities and the royal family.

A Tailwaggers Club member would wear this tag on their collar, to show their support to their doggie friends.

This pet tag belonged to a dog named ‘Weaver’ who lived on Mayals Road in Swansea. Perhaps he lost his member’s tag when he was enjoying a run in Singleton Park.

Now a trust, Tailwaggers Club is still running today, providing advice and support for owners who find it difficult to pay for the vet’s bills.