You are here: Home / Our collection / Finds from Swansea and Neath / Roman Bone Comb 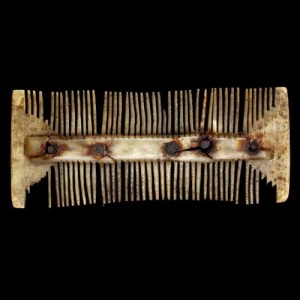 A double-sided toilet comb, largely complete except for a few teeth.

Apparently made from a single sheet of bone with hand-cut teeth spaced at approximately 0.2cm. intervals. The ends have unworked margins and diagonal flutes created by decreasing the length of the teeth.

The teeth are of unequal length, though this is probably not due to wear. A pair of uneven strengthening bars, with convex tops, run along the centre of the comb, but stop short of its ends and are held in place by five iron rivets. They are scarred where the teeth were cut.

This comb was excavated at Minchin Hole in Pennard, on Gower by J. G. Rutter and E. J. Mason.