You are here: Home / Our collection / Finds from Swansea and Neath / Bronze Button 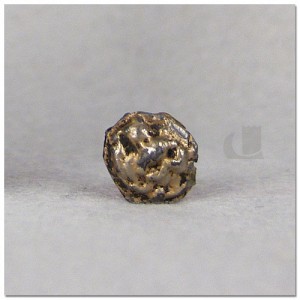 In 1860/1, the Reverend Edward Knight James, Rector of Penmaen, discovered a fragment of painted glass whilst walking on Penmaen Burrows.

Knowing of the local tradition which thought a church and perhaps a whole village called ‘Stedworlango’ was buried beneath the dunes, he pursued the find further, notifying his friend, Matthew Moggridge – “..a student of nature and fossils” (Gabb,G. Mr. Dillwyn’s Diary).

With the permission of landowner, C.R.M.Talbot, they employed two labourers to clear the site and discovered the remains of a medieval church and a number of artefacts, including this button, which are now on display at Swansea Museum.

These artefacts were originally gifted to the Royal Institution of South Wales by Mr.Moggridge, who was married to Fanny Dillwyn, eldest daughter of Lewis Weston Dillwyn.

In 1920, Swansea’s public analyst, Clarence A. Seyler proved that ‘Stedworlango’ was in fact just a single field and not an entire lost village.