You are here: Home / Our collection / Egyptian artefacts / Offering Vessels 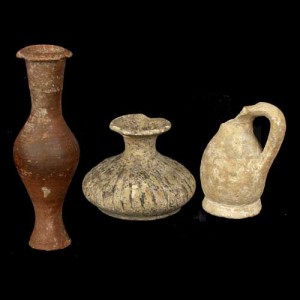 These miniature offering vessels are part of a votive deposit excavated on the slope of the acropolis of Cyrene in 1910 – 11. Cyrene was a Greek town founded in Libya in the 7th century B.C.

It developed into a large and beautiful city, the most important Greek city in North Africa, renowned for its schools of philosophy and medicine.

These vessels were acquired by Dr. A. F. S. Sladden, medical officer to the expedition which was led by Richard Norton. Dr. Sladden was later to work as a pathologist in Swansea, presenting the vessels to the Royal Institution of South Wales (Swansea Museum) in 1962.